Home again after the excitement of ICHEP, extensively blogged for the Guardian. No physics in this post; even I need a break from it.

A week of ICHEP was followed by a small add-on meeting at LAL Orsay, so I’ve spent best part of the last 10 days in Paris (one day was spent in Swindon, so I do mean the best part). I like Paris a lot, and my wife came out for the weekend in the middle, so even better. My hotel was pretty dumpy but functional, and since it served breakfast in a nicotine-stained dungeon, I went to a cafe every morning and by the end even the Parisian waiter became pally.

The Colliding Particles crew (both of them) were around most of the time filming (in part also for the Guardian). They also came to the previous ICHEP, which was in 2008 in Philadelphia. One of my colleagues actually saw the Philadelphia film and thought it was made in Paris.

Of course Philadelphia and Paris are not so similar. We had a meal in a small bistro in Paris, seemingly off the beaten track but which presumably featured prominently in some key guidebook, since it turned out to be full of American couples plus children, all drinking water. I became so culturally disorientated I spilled my wine all over the table.

The French seem remarkably fond of women, usually in flowing robes, as personifications of ideas such as provinces and soup. Or liberty I suppose, which is one they gave the USA. Apparently the woman (not in a flowing robe) used for the poster of the LAL meeting is the personification of predictive power. If so, maybe she’s really giving us the finger and there’s no Higgs.

Stop it. No physics here. 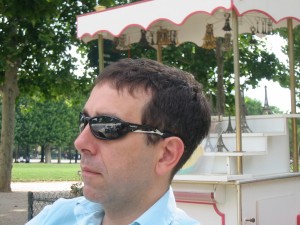 Being distracted by the Eiffel Tower while its mates sneak up on me.

Of course the main thing France and the US have in common is that they suffered the two greatest and most enduring cultural insults ever perpetrated, and both by the English. Every time I hear the Marseillaise (for example on the little music box we bought as a present for my son) I want to start singing The Beatles “All You Need is Love”. And I just could not take the Liberty Bell museum seriously, because they insisted on playing the theme from Monty Python on a loop.