My favourite particle: the muon

In 1900, shortly after the electron and radioactivity were discovered, Lord Kelvin famously remarked:

“There is nothing new to be discovered in physics. All that remains is more and more precise measurement”

He would be proved horribly wrong. The discovery of the nucleus and then its constituents, the proton and neutron, revolutionised our view of what the world was made of. Our understanding of the world changed from the classical to the quantum and up to 1933 quantum mechanics went from success to success in describing experimental observations. This culminated in the Dirac equation, which predicted the existence of anti-matter, confirmed shortly afterwards by the discovery of the anti-electron (the positron). However, the physicists’ smugness was short-lived. Behind the scenes, all was not well. Quantum Mechanics was struggling to provide an explanation for particles that were raining down on earth from the cosmos at a rate of 10,000 per minute per m2. A veritable who’s-who of physics luminaries were trying to understand the nature of these “cosmic-ray” particles. Since at that time the only known particles were electrons, protons, neutrons, photons and (yet to be directly detected) neutrinos. It was assumed that these cosmic-ray particles arriving at the earth were electrons.

The problem with this (wrong) assumption was that the “electrons” raining down on the earth seemed to come in two varieties –1. those which were easily absorbed by blocks of lead and which created a secondary shower of electrons, positrons and photons when they interacted with the lead and 2. those that penetrated the lead blocks with aplomb.

At first, quantum mechanics had no explanation for why electrons should behave in either of these ways, but gradually the theory was modified (notably by Bethe, Carlson, Heitler and Oppenheimer). They found a way to describe type 1 (the “electron” that showered in lead) but, alas, they had no such luck finding an explanation for the type 2 penetrating particles. Theoretical physicists (having enjoyed so much success up to then) were in despair. Oppenheimer, always a bloke for adding a bit of gravitas to the situation and who generally preferred his glass half empty, wrote to his brother in 1934: 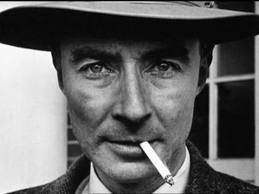 “As you undoubtedly know, theoretical physics – what with the haunting ghosts of neutrinos, the Copenhagen conviction, against all evidence, that cosmic rays are protons, Born’s absolutely unquantizable field theory, the divergence difficulties with the positron and the utter impossibility of making a rigorous calculation at all – is in a hell of a way”

Quickly, the idea that the penetrating particles were protons was dismissed and the physics community was faced with a stark choice: a new particle or the acceptance that quantum mechanics was hopelessly flawed. For a time (now conveniently overlooked) they fudged the issue and started to speak sotto voce about the possibility of “red and green electrons” – one type being absorbed and the other penetrating.

The particle was originally given the name the “mesotron”. As is often the case in science, there was not a “Eureka moment” of discovery, but a gradual dawning of a new paradigm through the work of many people, both theoretical and experimental. Anderson got the credit (having already bagged a Nobel Prize for observing the positron, it was probably an easier sell..) but there was a considerable dramatis personae – Bethe, Heitler, Rossi, Neddermeyer, Street, Stevenson, Carlson and Oppenheimer – without whose contributions the “mesotron” would not have been discovered. The “mesotron” was quickly renamed the muon, and it became clear that the muon wasn’t a red or green electron, since if it were just a heavy or a more energetic electron it should decay to an electron and a photon, and this was not observed. The muon appeared to be its own distinct particle and so the muon (after the electron) was the second fundamental particle (i.e. one that doesn’t seem to be made of other particles) to be discovered. Its discovery thus heralded the start of particle physics as a subject.

There are several hundred muons going through your head every second. Fortunately, their low energies (and high mass) mean they are harmless. These muons originate from the collisions of cosmic-rays (primarily protons spewed out by stars) with the atoms in our upper atmosphere. After their discovery it was observed that the number of these muons decreased as you got closer to the earth and the natural (and correct) conclusion was that they were not stable particles like the electron but a bit fly-by-night (and day), and they decayed to other more familiar particles (electrons and neutrinos) in about 2 millionths of a second. At this point it was known what the mass of the electron was and neutrinos were assumed massless, so by looking at the trajectory and energy of the electron from the muon decay (or measuring the time it took for the muon to decay) it became clear the the muon was a bit of a porker. It weighed in at about 200 times the mass of the electron.

The muon is not a great impresario and has a rather restricted repertoire best suited perhaps for a fleeting appearance on X-factor. In the last 75 years we have observed it do only two things: interact and produce a neutrino or decay and produce an electron and two neutrinos. But, we believe the muon will have the last laugh and is more than a two-trick pony. The muon has something up its sleeve which will help us understand physics at energy scales well beyond the LHC. Pertinently, we believe that it will reveal a new type of fundamental interaction (in addition to the ones we know (the electromagnetic, gravitational and weak and strong nuclear interactions) that can help explain one of the longest standing problems in physics: how was the majority of the anti-matter created in The Big Bang hoovered-up (or presumably Dysoned-up these days) at the start of the Universe, in the time it takes to make a cup of tea?

We are planning to produce a beam of muons of unparalleled intensity to observe this new type of interaction (which I’ll describe in the future). Indeed, after a bit of a slack period, this is an exciting time to be a muon and their penetrating and magnetic properties are being exploited for a range of applications beyond particle physics. They were used in the 1960s to X-ray the pyramids to search for hidden chambers and recent advances in charged particle detectors have opened up the possibility to utilize cosmic-ray muons to precisely image very large volumes (sea containers, cargo vehicles, train stations, etc.) to detect bombs, fissile material or things that go bang in the night.  Muons are being used to study the properties of new compound materials that have the potential to provide novel semiconductors for the electronics industry or room-temperature superconductors with a diversity of applications from levitated trains (could be tricky on The Northern Line) to lossless power transmission. Recently a beam of muons produced at the UK ISIS facility was used to observe the phenomena of “magnetricity” in “spin-ice” which is potentially the first step towards a magnetic version of electronics.

So stay tuned, the muon is a plodder but its 15 minutes of fame is nigh.

I am a particle physicist working on sonification of the data output from the ATLAS detector at CERN. The project I'm working on is called LHCsound and is funded by the STFC. It is based at University College London where I have just finished my PhD on the search prospects for a low mass standard model Higgs Boson. I have now moved to Chicago to start an ATLAS postdoc with Argonne National Laboratory.
View all posts by lilyasquith →
This entry was posted in My Favourite Particle, Particle Physics, Physics, Science. Bookmark the permalink.
Why Evolution Is True