We’ve been in ChicagoLand for three weeks tomorrow. Haven’t made any huge contribution to the Argonne national laboratory physics program yet, but have worked out which cafeteria queue to get in to get the tall blonde lady who charges you about 2/3 as much as the small grumpy one. 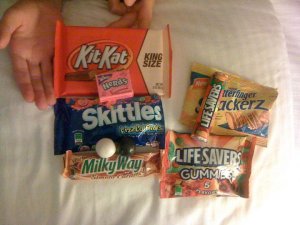 Most of these sweets are illegal in the UK.

My daughter Jessie had “Lockdown practice” at school this week. This is her description of it:
Code yellow:
Meaning: there is someone outside on grounds who wants to kill you.
Action: close blinds and windows and be silent.
Code red:
Meaning: there is someone in the building who wants to kill you.
Action: turn off lights, lock doors and hide out of view. Jessie is going to get under the shelves.
Fire alarm:
If this goes off you have to stay inside the building in case it is really someone wanting you to go outside so they can shoot you.
Tornado alarm:
Go outside the lockers and get in a crouch position, look at the ground and not at anyone else.
I had to buy this much candy from 7-11 to take our minds of gunshots and masked teenagers and screaming, terrified children.

I am a particle physicist working on sonification of the data output from the ATLAS detector at CERN. The project I'm working on is called LHCsound and is funded by the STFC. It is based at University College London where I have just finished my PhD on the search prospects for a low mass standard model Higgs Boson. I have now moved to Chicago to start an ATLAS postdoc with Argonne National Laboratory.
View all posts by lilyasquith →
This entry was posted in Particle Physics, Physics, Physics Stories, Rambling, Science, Travel and tagged STFC. Bookmark the permalink.
Why Evolution Is True