A boost in trying times

My first ever blog post was about measuring the Higgs boson when it is produced with very high momentum and decays to b-quarks. When that happens, all the decay products of the Higgs appear in a single “jet” of particles. We proposed interrogating the internal structure of that jet to pick out the Higgs. In a seminar this week, Hannah Arnold from the ATLAS experiment showed the first actual measurement of this. 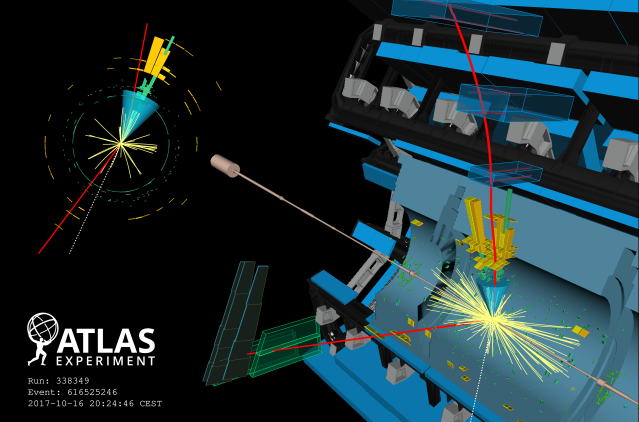 Back in 2008 when we first proposed it, the thought was that our “jet substructure” technique might be a way to discover the Higgs. If the Higgs mass had been about 114 GeV, we might have been right. However, the mass turned out to be a bit bigger, around 125 GeV, which means high momentum, or “boosted”, Higgs bosons decaying to b-quarks are a bit rarer¹. The Higgs was discovered by other means.

Even so, measuring the Higgs at high momentum, or “boost”, is important, and jet substructure techniques are needed there. For example if the boson is not a fundamental particle but is made of some more fundamental constituents (as implied but several extensions of the Standard Model) this is likely to show up as a deviation in the rate of events at high transverse momentum. Hence the dedication over the last ten years of colleagues on ATLAS to produce this measurement.

In fact Hannah showed an amazing array of new results, scoping out the properties and behaviour of the Higgs, and measuring some of them more precisely. There is a more detailed physics briefing available from some of my collaborators who actually did the work. This is where the image above, of a very boosted H→bb candidate collision, comes from. You can see that particles originating from the two b-quarks (green and yellow energy deposits in the calorimeters) have been merged into a single jet (blue cone)².

The briefing, and the seminar, give a much more complete description of the overall progress. And I know there are other things going on at the moment. But please pardon me for savouring the boosted Higgs-plus-vector-boson measurement for while. I am chuffed. It is quite a boost, and we all need one of those every now and then, especially in current circumstances.

The ATLAS note is documenting the analysis is available here.

¹ Coupled with the fact that Gavin, along with Matteo and Gregory, invented a better jet algorithm which meant “normal” jet techniques worked to somewhat higher momentum, this meant even the H→bb decays were measured without the need for jet substructure techniques.

² For illustrative purposes, and because this is a very high-momentum event, the jet “cone size” here is R=0.4, smaller than the 1.0 actually used in the analysis.

1 Response to A boost in trying times