There are interesting developments at the moment on the borders between particle physics and nuclear physics, in the study of hot dense blobs of matter made of quarks and gluons. 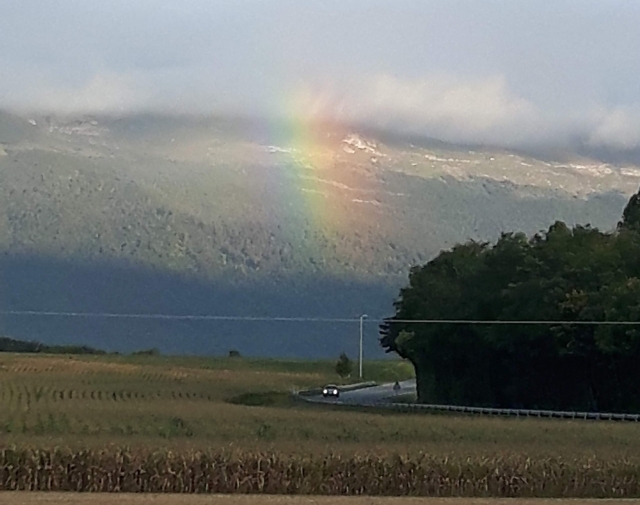 A fragment of rainbow over the LHC because why not

Such blobs of matter are created briefly in collisions between atomic nuclei at the LHC (CERN) and the Relativistic Heavy Ion Collider (RHIC) at Brookhaven. I wrote about the situation here; the bottom line is that we are seeing signs that blobs of this matter are being created even in proton-proton collisions. Before we got data from the LHC they were only expected to really occur in collisions between heavy ions (such as lead, gold, xenon) in which many pairs of protons and neutrons participate. As I described in the article linked above, this is challenging our ideas about the strong interaction, both in the realm of nuclear physics and for particle physicists who thought previously that “collective effects” of quark and gluon matter could be ignored.

A result was recently published by my experiment (ATLAS) with some bearing on this. (Full disclosure, not only am I an author by virtue of being a member of the ATLAS collaboration but I was involved in the internal review of the paper.) We looked at events in which a charm quark or a bottom quark were produced.

Impact parameter (d0) for particles (muons) from different kinds of quark. Particles from bottom quarks (red) have a broader distribution than those from charm (blue) which are in turn more broadly distributed than those from other sources (greed and purple)

The charm and bottom can be identified because they travel some distance from the main proton-proton collision point before they decay into other particles, and we can measure this by tracking the products of the decay back to their origin. This is tricky. But even trickier, we managed to statistically separate charm from bottom, using the fact that the tracks from charm quarks, when extrapolated backwards, generally pass closer to the collision point than do those from bottom (the impact parameter, see right).

Once the decay product of the charm or bottom has been identified, we look at how the other particles produced in the collision are distributed. Specifically, we look at whether they are more likely to be emitted at a similar angle to the charm (or bottom), or not. We find that for events with charm quarks, the other particles are more likely to be close in angle (or in fact opposite in angle) to the charm quark. This is true even when they are a long way away in the detector. This is a sign of “elliptical flow”. It is what you expect if they are being emitted from a hot dense blob of matter which is moving collectively. It is not what we expected in a proton-proton collision.

In events with bottom quarks, there is no sign of such an effect. The bottom quark is about three times more massive than the charm, so maybe it is impervious to the a blob of quark-gluon matter, even if such a blob is created in the collision.

This is a developing area, and this data will be important input for theorists trying build a model for what is going on and to understand it in terms of our theory of the strong interaction.

It may not have had as much impact with the public as some other physics, and citations are a flawed metric, but it is interesting to note that after Higgs papers and technical papers describing the detectors, the most cited papers from both ATLAS and CMS are connected to this area of physics. To quote Isaac Asimov:

The most exciting phrase to hear in science, the one that heralds new discoveries, is not “Eureka!” (I found it!) but “That’s funny …”

The observation of collective effects in proton-proton collisions was definitely a “that’s funny” moment, and we’re still unravelling the implications.