Here’s a reasonable quality recording of a colloquium I gave in Valencia last month. It’s aimed at fellow particle physicists rather than the general public, but I know some of you fit that description, and some of it might be of slightly wider interest anyway if you have the patience.

There’s more information (in Spanish) here. (The talk is in English, sorry. My Spanish O level would not have been up to it even three decades ago, and in the meantime pretty much all I remember is he olvidado Español, sadly.) 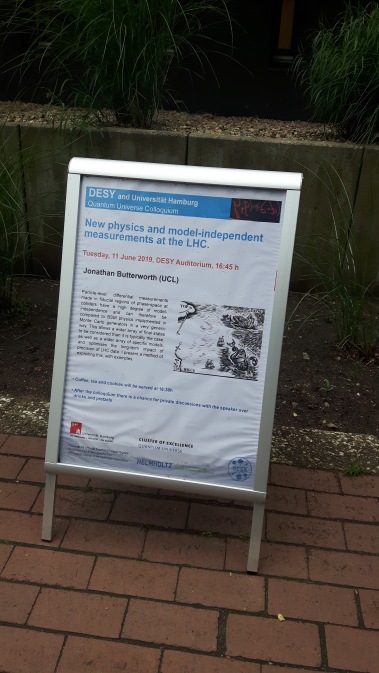 I like the way Chris Wormell’s maps from A Map of the Invisible/Atom Land fit with an actual academic talk as well as those aimed at laypeople. I also used them recently for even more specialised colloquia at DESY Hamburg and Zeuthen (Berlin). It tickled me seeing them on the poster.

I think the device works because the “exploring new territory”, which is the theme of the book, is not just a communication device but is how I actually think about particle physics. And I don’t see why academic talks shouldn’t have sea monsters.

The last time I was in Valencia was for the Boost meeting in 2012. Still a city I love. Thanks to Marcel Vos for the invitation and hosting. (And to Krisztian Peters and Priscilla Pani in Hamburg and Berlin respectively.)

(Also at the Cosmic Shambles network)