A paper on the arXiv this morning offers an explanation for an intriguing, long-standing anomalous result from the DAMA experiment. 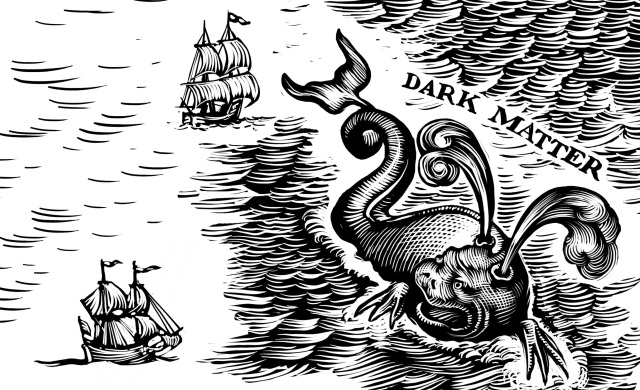 Illustration by Chris Wormell from “A Map of the Invisible” (detail)

According to our current best model of how the universe hangs together, the Earth orbits the Sun within a galactic halo of Dark Matter particles. The Dark Matter particles are imperceptible – transparent really, rather than dark – but their gravitational influence is needed to explain the motion and distribution of galaxies¹.

In this model, the dark halo is expected to move with the Sun around the galaxy. This means at some points in the year the Earth will be going with the flow, and sometimes against it. Any super-sensitive experiment attempting to pick up this “Dark Matter wind” could therefore expect to see some annual modulation in any signal they might see.

The DAMA experiment in Italy has been seeing just this for more that twenty years. They have various sources of background “noise”, but none of these was expected to give an annual modulation like the one they see, so the conclusion might be that the Dark matter wind is responsible. Unfortunately other experiments using different and even more sensitive techniques saw no sign of Dark Matter of the type required to explain the DAMA result. So no big Dark Matter party, that’s science for you. However, the DAMA result remained, unexplained, intriguing, and something that should really be understood, especially if you want to design successor experiments.

The four scientists from California who posted today’s paper claim to have done exactly that. It is well-established that there are seasonal changes in the underground density of Helium, connected to changes in temperature and the water table. Helium is a tiny atom, horribly penetrative, and  could apparently get into the DAMA detectors and cause the observed effect.

I am not an expert in these detector technologies, and this paper hasn’t yet been peer-reviewed or responded to by the DAMA collaboration². However, it looks credible and interesting to me, and the authors propose what looks like a simple way to test their hypothesis. I’ll be interested to see whether they are right, and whether this is then one more anomaly that in the end is understood within the Standard Model – of particle physics, cosmology, and this time, geology…

¹ The alternative would be to modify the general theory of relativity without breaking it, which no one has so far been able to convincingly manage.

² There have been several attempts to explain these results before, see references [23-27] here, which turned out not to be the answer. We will genuinely have to wait and see.

This post now also at the Cosmic Shambles Network.