I am dismayed by the plethora of null results coming out of my experiment, as well as from our friendly rivals, at the Large Hadron Collider. 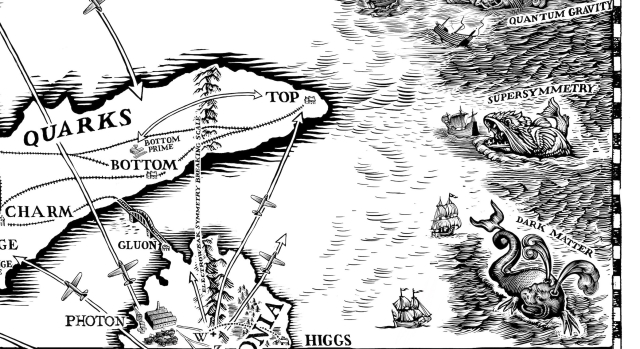 Don’t get me wrong, null results are important and it is a strength of particle physics that we acknowledge this. Reporting only positive results is the most effective way to introduce bias and undermine science.

Although many theorists are dismayed because we have not so far turned up evidence for their ideas about extending the Standard Model – new particles, new forces and so on – that is not the source of my dismay either. I would be happy to see some of that, but nature will do its thing whatever my wishes might be. I get a kick from finding out what nature’s thing is, even if it is more Standard Model in places we have never measured before. If the Standard Model turns out to be isolated, that is important new information.

What does dismay me is the number of “search” papers we produce where the conclusion is “no evidence for XYZ-beyond-the-Standard-Model-thing, boo”, without quantifying the implied agreement with the Standard Model.

There are many theorists using the Standard Model to make precise predictions for new phenomena, visible at the LHC. Measuring what happens in the highest-energy particle collisions and comparing that to these predictions is not a “null result”. It is a measurement of something real and interesting, that we never saw before, and a confrontation of that with a well-founded theory. (It can also, by the way, rule out swathes of XYZ-beyond-the-Standard-Model-thing just as the searches do.)

We are letting ourselves down as experimentalists if we see our job as simply to chase speculative theories. It’s fair enough to do some quick searches when you start collisions at a new, higher energy as we did in the 2010-2012 and 2015-2018 runs of the LHC. But now we are in it for the long haul, collecting more and more data at similar collision energies, probing this new region of nature more and more precisely as the statistical uncertainties shrink and rarer and rarer processes become accessible.

The balance between “searches” and “measurements”, where by the latter I mean distributions which can be compared quantitatively to state-of-the-art Standard Model predictions now and into the future, needs to shift, towards measurements. Not exclusively so – there will always be cool new signatures to hunt for I hope – but substantially.

This mini-rant expresses the way I have felt for several years, but was immediately provoked by an interesting bit of history from Tommaso Dorigo, recounting how the Tevatron experimentalists were urged to chase harder after Supersymmetry in a letter from a long list of big-shot theorists. As if they didn’t have enough to do discovering and measuring the top quark, measuring the mass of the W boson and more. Tommaso says:

reading the letter two decades after it was written, one cannot help grinning at the questionable encroachment.

Those studies of course were a good thing in principle. But the resources needed would have to be drawn away from other interesting measurements and searches.

It seems the theorists believed in supersymmetry so much, they were worried that the LEP2 experiments at CERN in Europe would scoop the Tevatron in the US. Frankly I wish the Tevatron had left us a legacy of a few more of their beautiful precision measurements, to be compared to present day Standard Model calculations. If that meant fewer null-result supersymmetry searches (which anyway are now superseded), so be it.

Of course I have the benefit of hindsight, but I think I’d have said the same then, having never been a true supersymmetry believer and having always thought the primary goal of an experiment is to first record what we see. I hope we on ATLAS and CMS focus on that a little more over the next few years, while the theorists make better Standard Model predictions and deal with the new information we have provided – that supersymmetry, if it is there at all, is not as easy to find as many of them expected.

If we do this, and keep the formidable technology of the accelerators and detectors functioning, the LHC will continue to be a fantastic success well into the future, revealing new vistas to us which may, or may not, be as predicted by the Standard Model.

Thanks Tommaso for the slice of history, which is covered in more depth in his book, Anomaly!