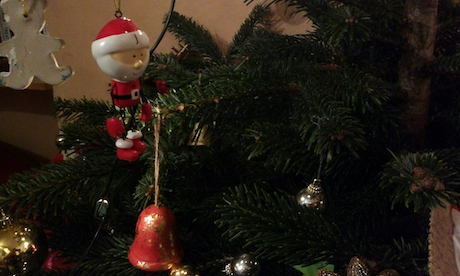 I do sometimes get asked “If you’ve found a Higgs boson, can you show me a picture of it?” Unfortunately, the answer is no. But the reason for this provides a resolution to a severe parental dilemma, and explains why I am in fact sometimes the tooth fairy. Bear with me.

I can’t show you something which is definitely the new boson, but I can show evidence for it, for example in the picture below. It shows the distribution (black circles) of the mass you get when you combine the energy and momenta of pairs of photons (particles of light) in the ATLAS detector. The bump shows that there are more of these photon pairs at masses corresponding to around 125 GeV than would be expected from the trend. This excess implies the existence of a particle at about this mass which decays to pairs of photons. 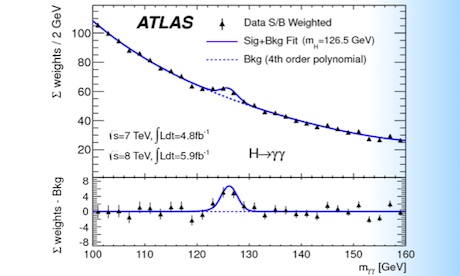 The bump in this plot would not be there unless there were a new boson. (credit, ATLAS experiment and CERN)

The key is that even if I show you a collision event with a pair of photons which exactly gives the “Higgs mass”, i.e. at the top of that peak, it is still not possible to be sure that this exact pair of photons came from a Higgs boson. Very roughly, at the peak there are about 65 events, and probably only about ten of these are due to the new boson. With our detector we can’t tell the difference between these and the 55 or so background events.

In fact, even with a perfect detector, some of that background would remain. In a quantum mechanical process (such as a proton-proton collision at the LHC), all that is definite is what goes in and what goes out. These you can measure.

There may be several possible ways of producing a set of new particles from the incoming ones; but if the resulting set is identical, it is not physically meaningful to say which way occurred. To calculate the probability of that result occurring, you have to add up all the possibilities in a particular fashion.

Now, to the parental dilemma. It is especially acute at this time of year, but if you have children who are losing their milk teeth, it is ever-present. Is the tooth fairy real? What about Father Christmas?

Do you spoil the fun or do you lie?

Something in me hates the idea of lying to my kids, and undermining trust. On the other hand I don’t want to be a miserable bastard.

Here’s my way out.

Anything which has the same initial state (tooth) and final state (money) might in fact be an event in which a tooth fairy was present.

To put it another way, anything which removes the tooth and delivers money shares such an essential property with a tooth fairy that it can be said to be one. (Anything removing both teeth and money is probably a dentist. Or possibly a mugger.)

By now, my son doesn’t believe a word of it of course. But in the early days it was the truth. We managed this transition without lies, betrayal and tears because actually, when tiptoeing into the bedroom with a shiny pound coin, I really am the tooth fairy. I am of course also at the same time Dad.

It’s not much of stretch to extend this to Father Christmas, and it also explains why sometimes Father Christmas uses the same wrapping paper as your parents – he and they are, in a sense, indistinguishable quantum possibilities for the delivery process.

This was adapted from my segment at Brian Cox and Robin Ince’s amazing “End of the World show“. Also at the Guardian. See also Chapter 6.6 of Smashing Physics.