I have recently been ‘submitting to The Grid’. This is not some kind of freaky S&M thing, disappointingly perhaps to some. It is a process we have to go through in order to analyze the data being collected by the ATLAS detector at CERN.

The ATLAS experiment has approximately a zillion (2000) people working on it. (My new town declares itself to have 11,000 people but I have not noticed any update to this since we moved here.) 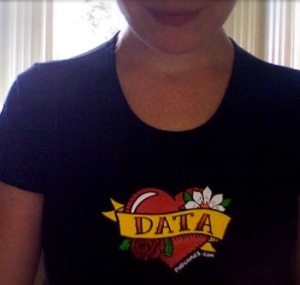 It is burbling out data in vast quantities. We cant catch it all because we would then have to store it somewhere, and it is currently producing terabytes of data per second*. Mental. So we just catch and store some of it. About 100 Megabytes per second.

I am a particle physicist working on sonification of the data output from the ATLAS detector at CERN. The project I'm working on is called LHCsound and is funded by the STFC. It is based at University College London where I have just finished my PhD on the search prospects for a low mass standard model Higgs Boson. I have now moved to Chicago to start an ATLAS postdoc with Argonne National Laboratory.
View all posts by lilyasquith →
This entry was posted in Particle Physics, Physics, Science and tagged LHC. Bookmark the permalink.
Why Evolution Is True