Now at The Guardian.

I am Lily, a new postdoc at Argonne National Lab.  I’m the one who thinks she can find the Higgs boson by listening to it. Thanks Jon for letting me play on your blog.

It’s a walk in the park.

I moved here just over a week ago to work on ATLAS physics analysis.  So far the closest I have got to doing any physics is talking about ways to limit the shock a colleague gets from the carpet-humidity-doorknob setup in his office here. But that’s a start. 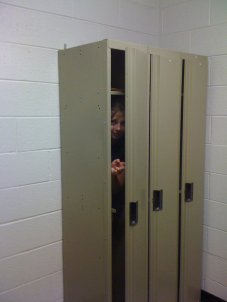 I’m loving it here so far. It was a tricky one deciding whether to move 4000 miles from London with an 11-year-old child and no driving license. I’m glad we did.

Argonne is full of smart people doing interesting physics. My PhD was on the search for the Higgs boson, which is one of the few areas the people at Argonne aren’t actively involved in. I’m giving a seminar about my research in the next couple of weeks which will either draw them in or put them off for life, or most likely a mixture of the two.

I have done no physics whatsoever in the last week, so here is an edited summary of our experiences so far, to be filed under “non-physics”.

My laptop died the night we arrived here. We fell asleep watching the Simpsons, and when I woke up the next morning the old girl had given up the ghost. I got the whrrr but no ping, and a black screen. I wrote at the time “This kind of shit is almost enough to start me believing in god (one of the angry, vengeful ones that smites non-believers).” I’m over it now though, madly in love with a younger, faster model. And a bit poorer, but having a working laptop in my situation is priceless.

The day after we arrived, around 50 soldiers checked in to our hotel, fresh from Afghanistan. Left to my own devices I would almost certainly have befriended them, but I was a bit scared. Blamed it on the jet lag. I didn’t want them to laugh at my pyjamas. Which are definitely not Dr Who.

The following day I finally decided that the intense pressure in my face and head was possibly not psychosomatic, so I went to Target, a massive supermarket. I had to sign an affidavit in order to purchase sudafed. Apparently sudafed is what crystal meth is made from. Felt fantastic all day.

Sweets from the soldiers

My sister has insisted (via the highly influential medium of video-skype) that I am not allowed to talk to the soldiers. This is difficult for the following reasons:
(a) there is nobody else here in the hotel.
(b) they gave my daughter Jessie a plate of cookies in the shape of a happy face.
(c) it is impossible to get a look inside their ravaged minds without talking to them just a bit.

The following day I spent the whole morning trying to spell my name to Illinois secretary of state voice recognition software. My daughter is registered at school, which she loved (phew). I couldn’t sleep well that night because the following morning I had to put her on a school bus in the hotel car park at 7:20. Eek.

The school bus was a breeze. I have never seen Jessie so happy: “Mum, I was born to live here”. And I slept well the following evening, due in part (I suspect) to locating an off license. It was the size of a small planet. Or perhaps a moon. Just thirty minutes walk up Kingery highway.

We’re having a really good time.

I wept a little, yes

People are much friendlier here than anywhere else I’ve been. The television is always on, everywhere. They have advertisements for antidepressants about every five minutes.

As vegetarians with no kitchen we are restricted to eating deep-fried cheese. There is no concept of waste- all the breakfast things in the hotel are throw-away polystyrene and plastic.

Jessie meets her hero at the Art Institute of Chicago

Every pond has a huge fountain on in the middle 24 hours a day. And people think we are insane for walking/cycling a couple of miles or even less. But they are really, really friendly. Must be the pills ;).

I am a particle physicist working on sonification of the data output from the ATLAS detector at CERN. The project I'm working on is called LHCsound and is funded by the STFC. It is based at University College London where I have just finished my PhD on the search prospects for a low mass standard model Higgs Boson. I have now moved to Chicago to start an ATLAS postdoc with Argonne National Laboratory.
View all posts by lilyasquith →
This entry was posted in Particle Physics, Physics, Physics Stories, Science, Travel, Writing. Bookmark the permalink.

2 Responses to Notes from Chicago