A couple of days ago I took part in a “packed lunch” discussion at the Wellcome Exhibition, about CERN, the LHC, and my work at UCL. A lot of fun. I turned up with a piece of the LHC we built at UCL (ok, it was basically a big printed circuit board) and enjoyed a chat with the excellent Dan Glaser followed by some discussion with the audience. The podcast of this is available here. 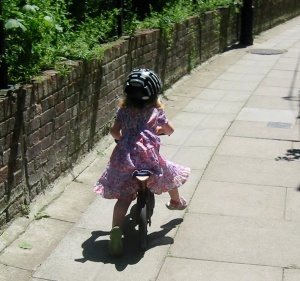 Some protons going about 8 metres per second

The Wellcome centre is a brilliant place and it was good to talk about CERN and fundamental physics in a place more used to cutting-edge life-sciences. The packed lunch was really packed too, standing room only, with people who had dropped in during lunch and some who had travelled specially.

One theme was how being a professor at UCL fits with working at CERN (in Geneva). How do we contribute, and how do we benefit?

CERN is a really international lab. British scientists, including those from UCL, are essential to the success of the whole thing. Only a fraction of those people working on the big experiments (mine is ATLAS) are actually CERN employees, and those employees themselves are drawn from all over Europe and beyond. I talked more about this in the podcast.

As to how we benefit: as a country there are many ways. But looking at it from the point of view of teaching physics in UCL, the main thing is that if we didn’t participate in CERN we would be cut off from the energy frontier in physics. This means we’d sit back and watch while the rest of the world found out whether or not the Higgs boson exists (even though Peter Higgs is a British scientist based in Edinburgh, who spent some time at UCL).*

It’s a critical motivation in my teaching, and as far as I can tell in the students’ learning, that physics is a living subject where the textbooks are still being written and rewritten. CERN is arguably the most high profile place doing this. Physics is useful and interesting all over  the place, but it’s hard to imagine telling the brightest and best physics students “learn all this stuff because it’s useful, but don’t get carried away trying to do new fundamental physics, we don’t do that here”. I hope we are never put in that position.

Funnily enough one question which came up in the discussion was directly from the first year mathematical methods course I teach. And I didn’t know the (exact) answer, which seemed outrage the questioner somewhat.

This course is typical of first year physics degree courses; the main goal is to provide students with the mathematical tools they need to do degree-level physics. It contains some techniques for solving differential equations, doing multi-dimensional integrals, matrix manipulation and coordinate transformations. The sweetener at the end is that we do Einstein’s special relativity. I just finished marking 150 exam scripts; a relief to all concerned.

The question was “how fast does a proton go in the LHC”. The answer is “nearly the speed of light” of course, as has been the answer for every high energy accelerator for decades. The actual answer is 0.999999964 times the speed of light now, and when we go up to full energy it will be 0.999999991 times the speed of light. In the first case this is 299792447 metres per second and in the second it is 299792455 metres per second. So all the effort we’ll go to in 2012 to get up to full energy buys us another 8 metres per second in speed; about as fast as I cycle to work. As I tried to explain to the questioner, it is actually the energy that matters. Special relativity means the protons can never reach the speed of light. In fact they get heavier and heavier instead as we put in more energy. Most of my undergraduate class now know how this works. I think I will try and explain further it in a separate blog post soon, ‘cos it’s not really that tricky.

I also got gingerbread daleks. Bonus.

*As I said in the discussion, it’s really about understanding electroweak symmetry breaking, but that’s a longer story, some of which I described in the last two paragraphs of this. I also described my ideas (mentioned in the discussion) on how to find a Higgs here. Other things I mentioned included the aural interpretation of particle collisions at http://www.lhcsound.moonfruit.com/.

3 Responses to Wellcome to Physics