A follow up on research impact and the REF

Anyone connected with UK academia, who follows news about it, or indeed who has met a UK academic socially over the last couple of years, will probably have heard about the Research Excellence Framework (REF). All UK universities had their research assessed in a long-drawn-out process which will influence how billions of pounds of research funding are distributed. Similar excercises go on every six or so years. 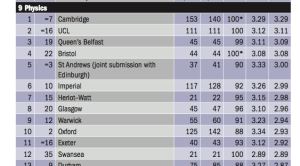 A new element in the REF this time was the inclusion of some assessment of “Impact”. This (like the REF itself) is far from universally popular. Personally I’m relatively supportive of this element in principle though, as I wrote here. Essentially, while I don’t think all academic research should be driven by predictions of its impact beyond academia, I do think that it should be part of the mix. The research activity of any major physics department should, even serendipitously, have some impact outside of the academic discipline (as well as lots in it), and it is worth collecting and assessing some evidence for this. Your mileage in other subjects may vary.

I also considered whether my Guardian blog might constitute a form of impact-beyond-academia for the discovery of the Higgs boson and the other work of the Large Hadron Collider, and I even asked readers for evidence and help (thanks!). In the end we did submit a “case study” on this. There is a summary of the case that was submitted here. The studies generally have more hard evidence than is given in that précis, but you get the idea.

Similar summaries of all UCL’s impact case studies are given here. Enjoy…