A quick post to explain something about this, the first ATLAS physics results from LHC collisions at 7000 GeV.

The measurement is a repeat of the ATLAS minimum bias measurement at 900 GeV, except these protons hit each other at 7000 GeV, an energy 3.5 times higher than we ever managed before in an accelerator. (That link hopefully explains what “minimum bias” means.)

This is not a journal publication, it’s a “preliminary” measurement, to be presented at conferences. Hence the 1.5 in my title – we are working on 2.0, which is intended for a paper. But it is public, and it is useful to put it out there so it can be discussed by physicists who are not on ATLAS. And it does tell us something new. 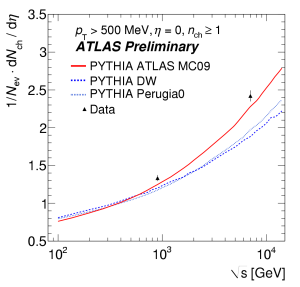 The average number of charged particles as a function of proton-proton collision energy for some models (curves), compared to data (points).

The interesting thing is to see how the models stack up. A factor 3.5 in energy is a long way to extrapolate a model. You can see for instance in this figure that the different expectations for the average number of charged particles diverge as you go up in energy. We measured several other characteristics of these collisions too. In fact, the real answer could have been miles away – no-one has ever measured this before (apart from ALICE, today 🙂 ). The models are the best (physics inspired) guesses we had, but these particular distributions cannot be predicted from first principles from the Standard Model of particle physics.

The fact that our favourite model (ATLAS MC09) is not too far from the data is  good. These events are the “average” events. We need to model them pretty well so we can start sifting out the rarer, more interesting events (which may have, for example, a Higgs boson in).

There’s a nice article on scientific conferences here, and a video here, giving some flavour of the kind of places these results will be discussed.

Hope that helps. Again, it’s not going to be a Nobel Prize. But, incrementally, we now know more about physics than we did last week.